The Donkey And The Palm Branch

I am writing my blog this time, on the day that we observed as Palm Sunday, which is the first day of Holy Week.  Holy Week is the week leading up to Good Friday, which is the day of Jesus’s crucifixion.  Easter is the following Sunday when we celebrate Christ’s resurrection from the grave. Some also call this day Resurrection Sunday.

After watching a church service this morning.  I decided to share a few things for those who may not know what the palm branches and the donkey are symbolic of, as we hear about Palm Sunday and Holy Week this week. Let’s read the scriptures first:

Matthew 21:1-5
21 As they approached Jerusalem and came to Bethphage on the Mount of Olives, Jesus sent two disciples, 2 saying to them, “Go to the village ahead of you and at once you will find a donkey tied there, with her colt by her. Untie them and bring them to me. 3 If anyone says anything to you, say that the Lord needs them, and he will send them right away.”
4 This took place to fulfill what was spoken through the prophet:
5 “Say to Daughter Zion,  ‘See, your king comes to you, gentle and riding on a donkey,
and on a colt, the foal of a donkey.’”[a]
John 12:12
12 The next day the great crowd that had come for the festival heard that Jesus was on his way to Jerusalem.
Zechariah 9: 9-10
Rejoice greatly, Daughter Zion! Shout, Daughter Jerusalem!
See, your king comes to you, righteous and victorious,
lowly and riding on a donkey, on a colt, the foal of a donkey.
10 I will take away the chariots from Ephraim and the warhorses from Jerusalem, and the battle bow will be broken.
He will proclaim peace to the nations. His rule will extend from sea to sea and from the River[a] to the ends of the earth.

Are you as amazed as I am that the King of Kings and the Lord of Lords, chose to enter Jerusalem in a humble manner?  He sent for a lowly donkey to make his triumphant entrance.    You see Zechariah had already prophesied that the coming king would bring peace. The donkey is an animal of peace whereas the horse is an animal that is symbolic of war.  Although Jesus’ entrance here is one of peace, when He returns for His second coming He will be riding a horse and waging a righteous war.
Revelation 19: 11-16
11 I saw heaven standing open and there before me was a white horse, whose rider is called Faithful and True. With justice, he judges and wages war. 12 His eyes are like blazing fire, and on his head are many crowns. He has a name written on him that no one knows but he himself. 13 He is dressed in a robe dipped in blood, and his name is the Word of God. 14 The armies of heaven were following him, riding on white horses and dressed in fine linen, white and clean. 15 Coming out of his mouth is a sharp sword with which to strike down the nations. “He will rule them with an iron scepter.”[a] He treads the winepress of the fury of the wrath of God Almighty. 16 On his robe and on his thigh he has this name written:
King of kings and Lord of lords.

1. Victory over sin.
1st Corinthians 15: 56-57
56 The sting of death is sin, and the power of sin is the law. 57 But thanks be to God! He gives us the victory through our Lord Jesus Christ.
Romans 6:14
14 For sin shall no longer be your master because you are not under the law but under grace.
2. Triumph over death.
Revelation 1:18
18 I am the Living One; I was dead, and now look, I am alive forever and ever! And I hold the keys of death and Hades.
Romans 14:9
9 For this very reason, Christ died and returned to life so that he might be the Lord of both the dead and the living.
3.  Peace
John 14:27
27 Peace I leave with you; my peace I give you. I do not give to you as the world gives. Do not let your hearts be troubled and do not be afraid.
Isaiah 53:5
But he was pierced for our transgressions, he was crushed for our iniquities; the punishment that brought us peace was on him, and by his wounds, we are healed.
2nd Thessalonians 3:16
16 Now may the Lord of peace himself give you peace at all times and in every way. The Lord be with all of you.
Isaiah 9:6
For to us, a child is born, to us, a son is given, and the government will be on his shoulders.
And he will be called Wonderful Counselor, Mighty God,
Everlasting Father, and Prince of Peace.
Eternal Life
John 10: 28-30
28 I give them eternal life, and they shall never perish; no one will snatch them out of my hand.29 My Father, who has given them to me, is greater than all[a]; no one can snatch them out of my Father’s hand. 30 I and the Father are one.”
1 John 5:13
13 I write these things to you who believe in the name of the Son of God so that you may know that you have eternal life.
John 3:16
16 For God so loved the world that he gave his one and only Son, that whoever believes in him shall not perish but have eternal life.
John 3: 36
36 Whoever believes in the Son has eternal life, but whoever rejects the Son will not see life, for God’s wrath remains on them.

Palm Sunday is not the only time that we hear of palm branches being used.  Revelations speak of another time, when we all will hold palm branches in our hands, and what a joyful day of celebration that will be!

Revelation 7: 9-12
9 After this I looked, and there before me was a great multitude that no one could count, from every nation, tribe, people, and language, standing before the throne and before the Lamb. They were wearing white robes and were holding palm branches in their hands. 10 And they cried out in a loud voice:

“Salvation belongs to our God, who sits on the throne, and to the Lamb.”

“Amen!
Praise and glory and wisdom and thanks and honor and power and strength be to our God for ever and ever.
Amen!”

My prayer is that Holy Week will be a week when we will all really take time to focus on the gift of grace, mercy, love, and forgiveness that we have been given by Christ’s sacrifice on the cross.  May God bless you to have a wonderful Easter! 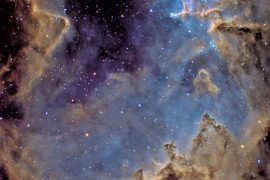 Only God Can Satisfy 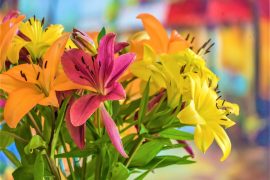 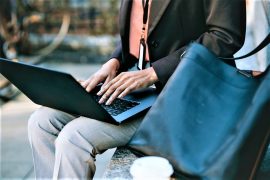